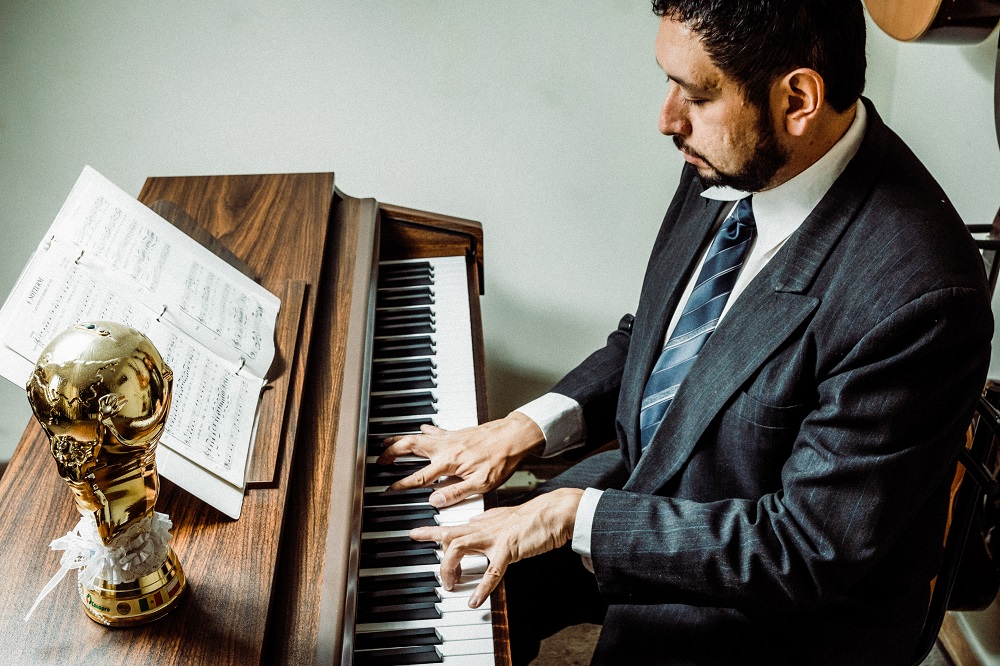 Wanly on the surface (metaphorically speaking) and rarely smiling (literally), let alone laughing, I consider myself a tremendously cheerful person most of the time. One of the habits that brings me a remarkable pleasure is teaching myself some elementary notions of a number of disciplines connected to my singing, even if I’ve no underhanded intention – or aptitude – to ever become a qualified expert in any of them. Yet again, it’s not just black, white or grey.

Honing those crafts is still a marvellous experience and it always feeds into how I evolve as a singing apprentice. Said parallel transitory ventures include arranging vocal pieces, conducting choirs, editing videos, judging auditions (channelling my inner Simon Cowell), mixing multi-tracked recordings (not necessarily my own), organising studio or live work (not just for myself), penning detailed reviews, playing guitar, piano and a tiny bit of charango (a Bolivian petite hybrid of a ukelele and a lute), and writing mission/vision statements as well as contest applications.

Of course I’m not by any means proficient, or even close to it. I definitely wouldn’t make a good pro at any of those activities – well, more than a few people definitely think the same of my singing, and that’s alright – and I’m not in love with any of them. To put it in millennial terms: I like them as friends, that’s all.

Equipping my renditions with a basic harmonic and rhythmic support on either piano or guitar is something I take extremely seriously: by choosing to be my own accompanist, I’m limiting myself to what I can do on either instrument (which isn’t a lot, really) and to having less freedom of movement; on the other hand, I’m also making sure everything involved with the execution is closely connected, and focusing my energy on both tasks is part of the overall routine in itself.

Vaguely speaking, I generally try to utilise the particular language of each instrument and associate with its sound and possibilities, rather than merely copying the same patterns on both. I also focus on bestowing the piece with some sense of narrative and approach it from different angles, with is why I frequently start off unaccompanied and then increasingly add to the spectrum – for instance, on piano, I may start off with the right hand playing the root, then the root in octaves, then triadic arpeggios and then I add octave bass on the left hand to make it more dramatic and theatrical.

Equalisation is still a concept that evades me, same for adding delays and compression: I go with some presets and maybe once in a while ever so slightly tweak them to taste but I concede my extreme ignorance on the matter. I’m a lot better at mixing, though my (still awfully limited) competence is reserved for vocal polyphony almost exclusively, an area in which I do immodestly declare to have a sound vision and a refined approach for panning and balancing so that it sounds homogeneous enough to provide a mesmerising texture and heterogeneous enough to remain intriguing and with a few Easter eggs thrown in for good measure.

Reverb is of particular interest to me. I again use presets with some nearly negligible adjustments, also trying to hit that Goldilocks zone where it’s neither too overt nor too trifling. As I work with vocals the overwhelming majority of the time, I aim at adding enough of it to each individual track to both enhance its particular character and emphasise the blend. When I show that to my producer, he recreates the effect a thousand times better, successfully bringing my idea to life and largely improving on it.

The thing about arranging is that I’m only able to do it with my own voice in mind – that’s where my extreme narcissism kicks in once more – so they’re utterly useless to anyone else. I’m fond of alternating the leading part and making sure it’s a bona fide ensemble rather than placing one of the tracks in the centre and leaving everything else in second place. My go-to panning setting for vocal quartets, by the way, is having the soprano a little bit to the right, the alto in the far left, the tenor in the far right and the bass a little bit to the left. From octets onwards, I try to scatter them all over the place if possible, treading that thin line between muddled and methodical.

Having been in charge of my digital channel back when it was filled with horrible home recordings, I’ve got some rudimentary notions of video editing. The usual: split-screen, synching, cutting, transitioning, fading in and out, adding transparency. It’s something I enjoy doing occasionally and which has even assisted me in supporting my top-drawer ambitions as once in a while some clients contact me to help them out – I always make it clear that I do not and cannot offer professional-quality standards, so at least I try to be honest from the beginning.

I suppose one of my primary strengths there is to, cheesy as it may sound, do it with love and care, nitpicking and correcting my multiple mistakes until they’ve been reduced as much as possible, and being well-organised with the timeline. I’m far better (i.e. a lot less mediocre) editing than I am filming, so when facing a choice between shooting a video and rearranging it I definitely go for the latter, though sometimes I end up doing both and I don’t mind.

Normal people tend to attend concerts, sit, cough, write on their mobiles, clap and maybe go for a swift meet and greet and that’s it. I often take notes and come up with an extensive appraisal which is as unqualified as it is dizzy, yet some people claim to enjoy it. I’m keen on introspection – shocking, right? – so that helps me out with my own route as well.

Key principles for coordinating the logistics of either live concerts or studio recordings (or even stuff such as photo shoots or interviews), both for myself and for others, are preparation, research and planning, which zealously includes anticipating potential risks and how to deal with them. It’s a satisfying process, albeit quite a taxing one as well, so I try to limit myself to do it a few times per year, if that.

Some time ago, the chances of myself seriously considering choir conducting as a side-project were about 0.1%. Now they’re 2%, which means there’s been a twenty-fold increase, which is remarkable. I’m still an absolute beginner, and I’m not thinking of it as a career choice at all, but it’s still interesting and complex and it helps me with my own singing, so the door is always open.