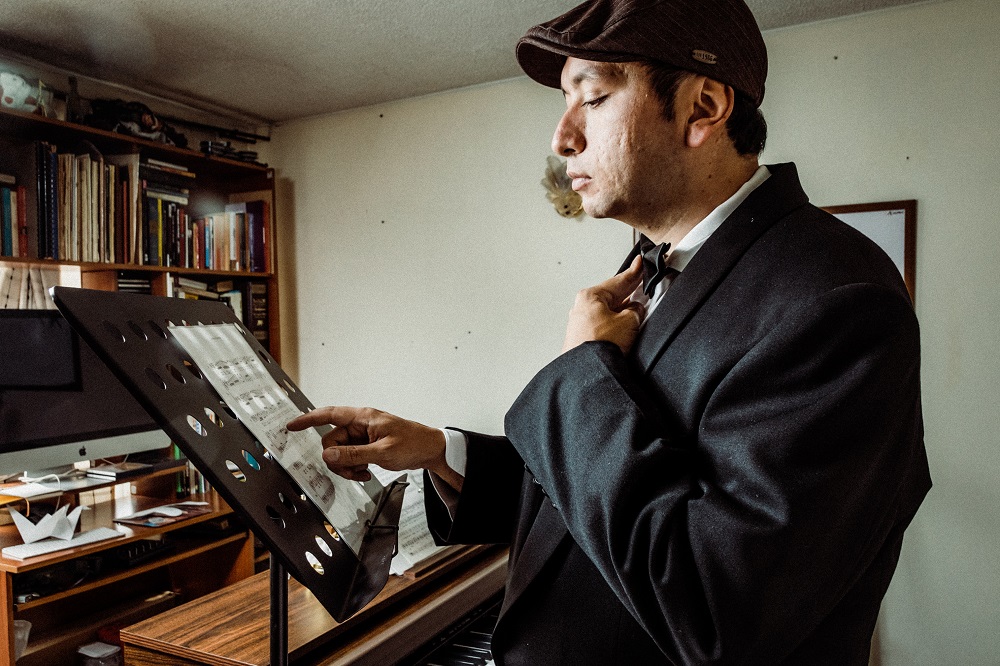 Broadly speaking, I tend to have the ‘why don’t I invest some dosh in equipping my home studio and then spend a few weeks taking some production and/or engineering lessons instead of going to professional recording facilities?’ convo once a month on average. From the outset it might look like a logical move on my part: it would theoretically save me a fortune and grant me more control; it’s not like I’m new to DIY anyway and I’m already my own tutor, my own repertoire selector, my own coach (in a musical way, not in a post-modern self-empowerment way) and my own accompanist, and on top of that I write my website contents by myself, so that ship’s already sailed a while ago.

Unless there’s access to a massive wealth source, budgeting is still a major part of any project as it sets some limitations and elicits decision-making and prioritising. Working within said restrictions, and in the best case scenario benefiting from them, is a key transferrable skill for quite a few artists in virtually any imaginable field. Once the overall guidelines have been fixed, it’s not a bad idea to seek some cost-cutting measures but they can be detrimental to the quality if they’re not chosen wisely.

Resorting to postponing a due-date may be undesirable but also, at least in a few cases, favourable for attaining the ultimate goal in the long run, so I’m not against making that call if there’s really no better course of action. All of that is, needless to say, largely subjective, and as a result there’s no absolute right or wrong in any of these cases. I’ll still give more weight to whatever is more consistent with the quality of the final product, and that’s always been the tie-breaker.

Some of the most effective cost-cutting measures are preposterously predictable but still may work better than any of those ‘hacks’ found online. Said strategies to maintain (or even enhance) the desired quality whilst also saving at least a bit of money include rehearsing, choosing the right people, rehearsing, accurately outlining the stages, rehearsing, preparing props beforehand (if applicable), rehearsing, and then rehearsing even more just to be safer.

The point is that thousands of people waste copious fortunes by booking the studios and then spending an eternity tuning, learning the material or making decisions which should’ve been discussed or considered much, much earlier. It’s not like last-minute ideas cannot take place, but it doesn’t follow everything would work as an improvisation – maybe there are some isolated cases in which it does, though I’d say they’re clearly statistical anomalies.

Far from wanting to cut corners, it’s a wiser choice to practise as much as possible so that only a few takes are required; to make sure said takes are spot on so that the mixer’s job is easier, therefore cheaper; to hire a sound sound engineer facilitating the upcoming steps; to be well-prepared for any video and/or photo shootings, saving time and money; to be polite and punctual; to have a clear idea and accurately convey it to potential publicists, agents and managers.

One massive mistake I’ve made in the past is trying to be in charge of absolutely everything despite my utter lack of expertise. It’s not by any means a surprise that virtually all of the outcomes were lacklustre, and, sure enough, they were low-priced in terms of funding, but there were extremely specific reasons for that to have been the case.

Resulting from DIY trends taken out of context, out of proportion, or merely out of our minds, quality can – and often does – suffer because of quantity. To paraphrase Kenneth Robinson, it’s a fast-food model rather than a farming one, and despite his comment having been made regarding education, it can also be applied elsewhere.

The point (yes, there is one!) is that long-term plans benefit from, palpably, thinking ahead: let’s say there are two possible engineers to hire for either a recording or a recital, and one charges only half as much as the other. It would initially seem like a no-brainer, but what if, as it’s statistically likely, it would take the inexpensive one twice as long to edit and mix, not to mention that the result wouldn’t be the same.

Higher costs, of course, do not always equal better results, and I’ve had my share of nasty experiences with people who have overcharged. There was a fantastic studio, not too far from where I live, which had indescribably superb equipment, but the in-house engineer was, to put it mildly, a bit of a swindler: he’d come up with all sorts of excuses to lengthen the recording session, as that obviously reflected in the bill.

Mammoth-sized projects were his speciality, so mine – which, even at that point (I was 24) solely consisted of unaccompanied multi-tracked vocals – was probably deemed a rip-off from his perspective, as it would ultimately cost a mere fraction of what he was used to. The fact I went in well prepared and had already warmed up rattled him too, as he saw the chance of demanding more money from me escaping.

Young and naïve as I was at the time, I still grew suspicious as he was conveniently coming up with random reasons to re-do takes. There was one that I hadn’t even begun when he’d already said he was going out for a fag while I practised a few times; he also took conveniently frequent loo breaks (or perhaps he was ill, but if so, he could’ve re-scheduled), opportunely forgot to press the right button and found out five minutes later – thus forcing more attempts, of course – and then it reportedly took him eight hours to finish a mix which, quite frankly, left a lot to be desired: from a technical perspective it was great, and way better than anything I could’ve done then (or since!), but he completely failed to understand what I wanted.

There was another one who would take advantage of the calibrating takes and extend them for an eternity, and when I voiced my concerns he merely blamed my inexperience and told me it was the way it was done. How would I doubt him? After all, at that point all I knew about that (and it was minimal) came from lousy home recordings and watching docos or reading a few books or articles.

Earlier on, yet another one (at a different facility) was speaking on his mobile phone for increasingly long periods, and judging by his giggles it wasn’t a case of something urgent or serious going on. He was merely scamming me, there’s no question there.

As soon as I first went to the studios where I’ve recorded ever since, I noticed I hadn’t been paranoid: of course it takes some time to set up the equipment and adjust input levels, but it doesn’t take that long if the person in charge is skilled enough; of course a pro is – hopefully – gonna quote for what he or she deserves, as that’s a job, and quite an important and challenging one at that; of course a three-minute-long piece will take a lot longer than three minutes to be tracked, but it doesn’t have to be an eternity.

Recording isn’t easy, or low-priced, at least when done by competent specialists at a sufficiently decent venue with quality equipment. There are a few bargains here and there (e.g. mics that cost a fraction of others but still sound incredibly well), but those aren’t common and I’d be suspicious if something seems too good to be true.

Saving money is useful, but it’s gotta be done cleverly or, chances are, it’s gonna cost even more in the long run to try to scrimp.