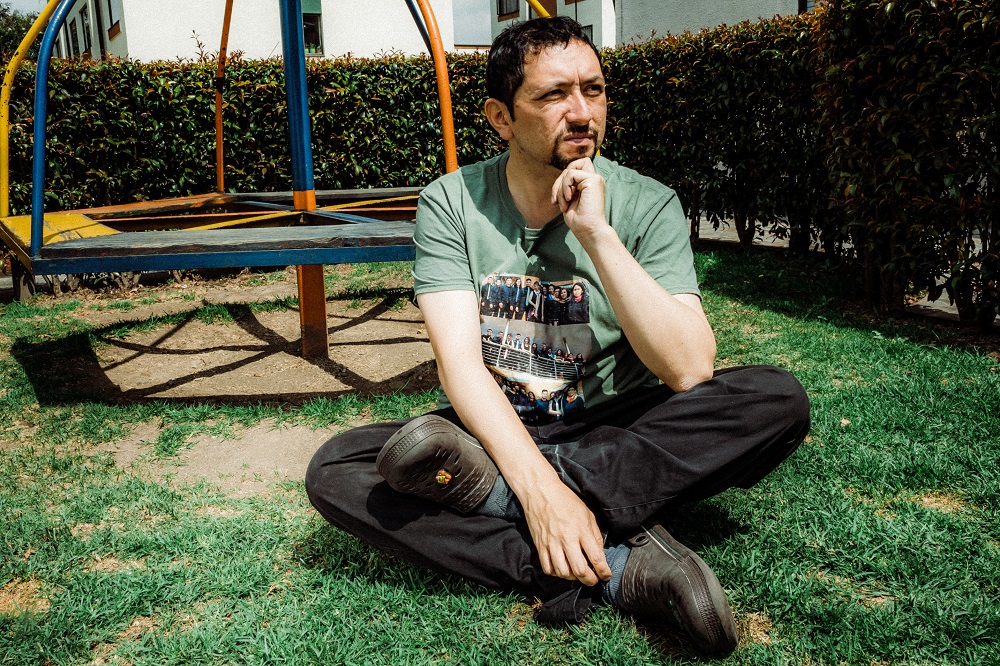 Charm and charisma aren’t exactly my strong suits by any stretch of the imagination, and even then I’ve had my share of lovely positive encouraging reactions from all sorts of people, from utter strangers to the nearest and dearest, and though I haven’t necessarily followed every single piece of advice (as that would be horrendous, not to mention contradictory), there’s been a lot that I’ve learnt from listening to what others said about me and my project.

One initial example dates from when I was about sixteen: a casual acquaintance (not by any means close enough to be a friend as such) suddenly sat beside me and told me he thought I should really give this music idea a go, as he – correctly – felt I was devoting way too much time studying and rehearsing for it to merely be a pastime. I shrugged it off as I was adamant I’d put the guitar away once I made it to legal adulthood and I’d focus on my goal of becoming a scientist. Needless to say, that never happened, and in the long run that bloke was obviously spot on.

My first motivation in teaching myself guitar (piano as well, though I never became proficient in either) was, pathetically enough, to impress my crush, but by the time I had the minimal aptitudes to actually serenade her, I was into someone else, so I tried to use music to court her and it didn’t work, but by then I had another, less paltry, reason to keep studying and practising: it made me slightly popular.

Earlier on, as a child, I’d been into Greek mythology, outlandish amounts of football stats, and of course first and foremost zoology, and I’d always felt people were wary of me and felt I was way too weird. I was often wrongly thought of being shy in school, but the truth was I was simply bored and had struck out when trying to discuss the topics that thrilled me. That’s also one of the reasons why I began writing a journal when I was about ten or so.

As soon as I began playing guitar and singing in front of people, I was suddenly someone they admired, and someone they even mentioned to the rest of their social circles, which was completely new to me. Adding to that the fact I was a teenager, of course that was pivotal at the time. I deliberately learnt the stuff that would wow, electrify, and elicit a positive response. I positively loved being the centre of attention, and I still do, but now it’s not my number one priority, not even remotely close to it.

Gathering people to witness my playing (which was sloppy and poor, yet flashy enough to flabbergast) became an on-going tradition in those days. I must have been around sixteen or so when I also began randomly swapping octaves in the middle of a piece – what a few years later I’d label ‘bipolar’ covers – as well as incorporating what would become my three guitar trademarks: the double-barre, the overuse of harmonics, and the frenetic diatonic scale fragments.

As far as piano was concerned, I fancied doing ascending arpeggios and adding some hand-crossing ornaments. There was something else I gradually developed: I’d begin a piece without any accompaniment, then add just the tonic on the right hand, then in octaves, then arpeggios over triads, and then (probably for the second cycle) I’d incorporate the left hand and generated a dramatic re-capitulation. It’s easy to realise by watching the overwhelming majority of my (few) videos that that never left me.

I suppose it was a bit of a gradual transformation that took place in those years and I don’t know where the cutting point was, if there was one to begin with: even as old as twenty-five I was still building my entire persona around standing out and being noticed – and preferably admired – by others. It was manifest in my hair, my speech, my playing and, especially, my singing, as that was also when I switched from guitar to vocals as my desired forte.

Nowadays I suppose I appreciate the positive feedback I receive on a regular basis, as well as the negative, but now it’s not a matter of actively seeking praise or high regard, those are occasional (and obviously welcome) by-products of my efforts, which are currently far more directed at doing it as competently as possible, regardless of whether or not they will render the audience gobsmacked.

Some of the comments I most commonly receive, non-surprisingly, relate to my ability to sing quite low notes. I’m not perfect, at all, but I can still do them a bit of justice and that’s my number one expertise. My high range is not as strong, though when I sporadically showcase it I usually get positive reactions as well. The ludicrous octave-leaping has almost entirely disappeared from my inventory, though I rescued some of it for the ending of my ‘Deck the Halls’ rendition.

What I’ve been trying to emphasise for a while now is the composer’s work, and become a vehicle for his or her creation to shine, rather than using the music as an excuse to boast my – again, barely a step above elementary – skills. When I do Dowland’s ‘Daphne Was Not So Chaste’, for instance, I aim at highlighting the words and what I feel to be quite an interesting take on superficiality, so I keep the execution as simple as I can and try not to slot in fireworks. I usually sing it in D Major (though I recorded it in E Major to have the guitar resonate more), which is comfortable and allows me to stay calm and peaceful all throughout.

E Ionian, E Dorian and E Aeolian are, in fact, key signatures I routinely use when adapting a piece to my voice, though lately I’ve been moving most of them to D. ‘What If I Never Speed’ is an exception at the moment, as I thoroughly relish the way those chords sound in E (Dorian, though there’s also a bit of Aeolian there). That tune was the very first one I ever recorded for my digital channel, though my first version of it (shot on Halloween 2007, when I was twenty-one and a couple of stone slimmer) has long been deleted.

Every time I’ve made someone cry (in a good way) it’s been extraordinary. I remember once in a hotel that I went to the ground floor lounge and there was a beautiful grand piano there, and I’d begun playing some stylised instrumental stuff for half an hour or so; at one point, I casually looked around and noticed there was a woman sat there, quietly listening, and sobbing. She told me in a somewhat broken English that she’d been touched by my playing and had witnessed most of what I’d done as she’d entered the room when I was trying out Pachelbel (which is usually how I start) and remained there for the rest of my impromptu private concert. It was moving.

There was also a more pop-related instance that same year (2014), when another German girl (who’d later become a dear friend) wept while listening to my melodramatic delivery of ‘Let It Go’ (which, of course, I’ve still got as part of my repertoire just in case someone jokingly requests it, in order to surprise them).

Learning to play and sing in order to impress women was never my intention, despite what initially instigated my quest in the year 2000 (I wasn’t after women back then, but after one specific woman). More anecdotes related to that: my first (and so far only) groupie when I was eighteen – well, a year earlier there’d been another instance in which my showing off had ignited someone’s desires, but I wouldn’t count her as a ‘groupie’ in the truest (and entirely subjective) sense of the word – and a bit of a twist aged nineteen…

One girl whom I deemed absolutely gorgeous walked into my flat one night with her boyfriend. In those days, it was quite common for me to host parties there as they’d give me the chance to display my alleged talents before a horde of strangers. I made it my mission to split that couple and I made sure I played the stuff the liked so she’d sing along and sit next to me. After an hour or so of that, which also included a friend of mine pouring drinks to further catalyse my plan’s fruition, her boyfriend approached me and tried to make a move, alluding at how my singing rendered me irresistible. Oops!

Very often I’ve also overdone a silly old joke which my baby brother absolutely hates: when someone hears me speak or sing and claims ‘oh, what a bass!’ I feign modesty and retort, ‘actually, I’m a soprano’. It’s daft and asinine, I thoroughly admit, but it’s made people laugh and exponentially increase my chances of being remembered by them, which has in turn allowed me to get more contracts and connexions, so at the end of the day it’s worth it.

Even though the shock factor has long been dethroned, I won’t deny it’s always gonna be a part of my tactic. It sounds, and is, ridiculously conceited, but that doesn’t mean it’s not true.